When discussing digital social networks, the discussion easily circles around Facebook, Twitter, LinkedIn and, more recently, Pinterest. It comes pretty naturally. They are all public and visible for all.

Social tools within organizations – often called Social Intranets or Collaboration tools – don’t make it as easily into the discussion. They are not in plain view, hidden behind firewalls full of information that companies and organizations naturally are unwilling to let loose externally.

The happier was I recently when I laid my hands on the chart below, as it shows that only Facebook reached the first million users faster than one of the leading social intranet platforms – IBM Connections. LinkedIn, Pinterest and Twitter needed considerably more months to reach their first million users.

I might just as well anticipate a couple of obvious questions: 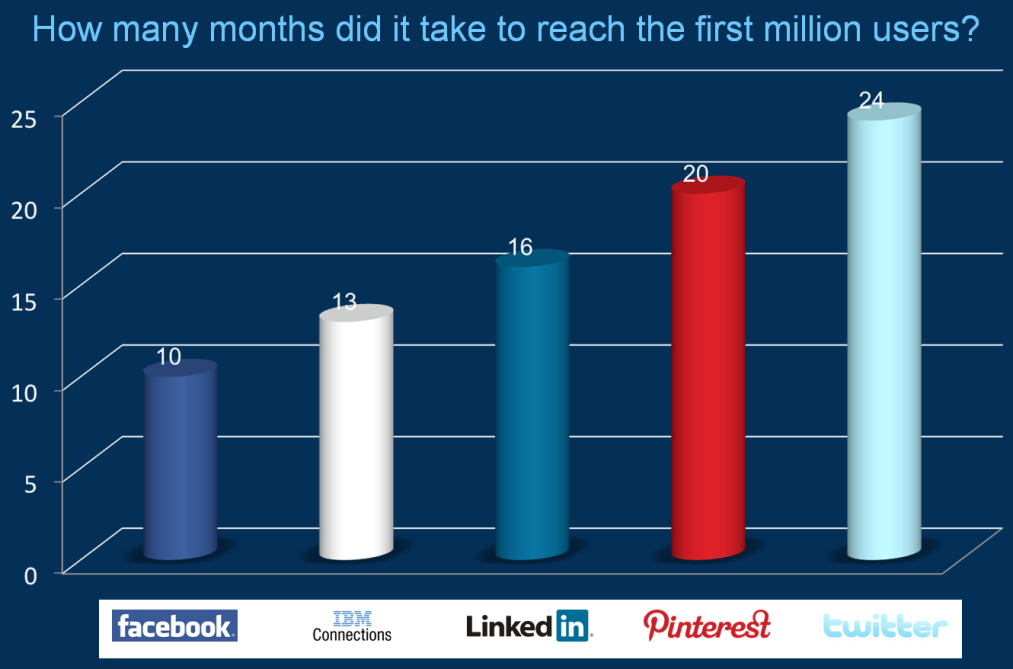 Naturally there are factors that prevent direct comparison, but not enough to change that main point of mine. While the decision to use a public social network is taken individually, the implementation of a social intranet is made for you, also which platform to use. Still, it is the individual employee who chooses to make use of it or to keep working the old fashioned way. On the other hand, the decision to join a public social network may well be instantaneous, while a decision on a corporate social network takes a long time and includes financial aspects we don’t need to think of as consumers.

When I lectured at a course on Social Intranets given by the Swedish Association of Communication Professionals (Sveriges Kommunikatörer) on 9 May, I had the opportunity to listen to the moderator, Kicki Strandh who used an expression that caught me instantly:

Social Intranets are what we hoped Intranets would become

Just think of all the predictions of free-flowing information, inspiration and collaboration or about the open corporation we heard some 10-15 years ago when intranets started appearing. Do they apply to how intranets turned out until recently or do they apply to a social intranet? Ref: Social Business is about People and Opportunities

But, it does not suffice to just let loose some new software, even if it’s great. Companies, organizations and their employees are creatures of habit, fully busy with dealing with ongoing operations, usually supported (or maybe rather “constrained”) by established processes and policies that safeguard status quo. Capturing the opportunities that come with implementing a social intranet requires executive level commitment and conscious and targeted efforts.

Tweets by The Social Swede

1. On Topic in English